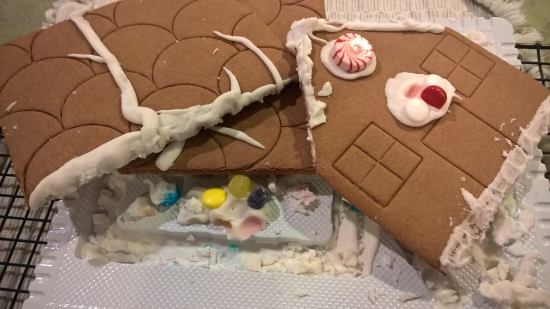 As gingerbread houses pop up this holiday season, I’m reminded to buy extra candy, because my boys will eat half of it while we attempt to assemble said house.

Ah- assembling! How many of us have tried to put together our wonky-made fresh cooked gingerbread walls and roofs that NEVER seem to quite fit together with icing that refuses to serve as an efficient mortar? I plan to write a complaint to the National Association of Home Builders’ gingerbread division.

This reality has prompted some of my friends to use glue guns to set walls and affix candy – but NOT I! I’m a traditionalist! … OK… I’ll admit I just don’t want members of the Man Cave consuming glue when they eventually eat the house. Oh- and it will happen, my friend.

The ginger-people are the first to go. That little man with the mini-mint buttons, standing in a marshmallow snow-bank in the back of the house? He’s a goner. So too is the ginger-woman with silky chocolate hair near the gum-drop tree. The nibblers think no one will notice. But the ginger-people in FRONT of the house are not spared. Never. Parts of their ginger legs and ginger arms disappear (no one will notice…) until all are gobbled up. Mind you, the gumdrops on the rooftop and cinnamon candies around the door are also declining in numbers, but alas, the ginger people are the prime target. None has ever made it to Christmas. And by then, the gingerbread house has sustained some serious damage (not just because of poor construction).

Easily by New Year’s the house has been consumed. And it’s around that time I realize, again, this holiday truth: making a gingerbread house is fun in the Man Cave. But making it disappear… is apparently even better.