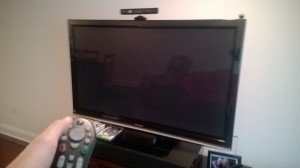 A friend of mine once said that the entertainment system in a TRUE man cave cannot (NOT) be operated by anyone who doesn’t poses a “y” chromosome. I scoffed at this, at first. With MY extensive background as an anchor/reporter in television and radio news?! . . . I will pause for a moment while my engineering friends in broadcasting have a good laugh at the thought of broadcast “talent” — of either gender — being able to figure out how the equipment works, but let me skip forward now.

The men of the man cave recently went out of town. The little men, to visit grandparents, the big man, to conduct business.

So I FINALLY get to use the big screen TV in the family room to watch whatever I want! News? No argument! Reality TV involving fashion? No complaints! Olympic curling? I’M SO THERE. Or so I thought.

Having posted pictures on social media of my feeble attempts to get the TV to truly turn on, my teenaged son calls.

“Dad says I need to walk you through how to turn on the TV. Hold the remote above your head and click ON.”

“Mom, you need to COMMAND it.”

Perhaps it doesn’t recognize my voice. “Honey,” I tell my oldest,” I think I need YOU to tell the TV to turn on.”

“WAIT! Let me put you on speaker phone.”

A fuzzy, static-filled sound emits from my cell-phone speaker, “X-b-bocks… wah teee veee! WAHH TEEE VEEE!” Too much distortion. Or at least that’s my best explanation.

Suffice it to say, I never did get the TV to turn on.

I’m sure I will be able to watch it again, when the men are home. The family room TV will play cartoons, science fiction, and anything else my manly men desire. Until then, I will go read a book. Several. Good night from the Man Cave. 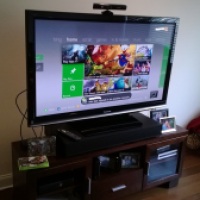