Me: Hopping up on my youngest son’s bed, “What-cha doin’?”

Ah, Pokémon. He’s been collecting them since he could talk. Many a Pokémon playing cards have been stuffed into Christmas stockings, wrapped neatly as birthday presents, or presented as a congratulatory “Hey I know spelling isn’t your best subject, but you got 7 out of 10, right? Nice!”

I nod (I’m the Mom. I do that whether or not I completely understand the whole collecting-cards thing.)

“THIS is my favorite. It’s when they use to draw Pikachu, chubby.”

He gets quiet as he carefully slips each card into a plastic sleeve, as collectors do when they’re handling something valuable.

“You know, Mom. I have this friend at school,” he says thoughtfully, as he carefully selects and wraps each card. “His Mom died.”

OK, I didn’t expect him to say that.

“He has a little brother.”

Now I don’t know what to say. I nod. (See earlier comment.)

“His little brother is really ‘into’ Pokémon, right now. He loves it,” he says.

“I think I’m going to give my friend my Pokémon cards. I don’t play with them a lot, anymore. He can play with his little brother,” he nods as if making a firm decision. “Mom?”

“Your eyes are watering.” 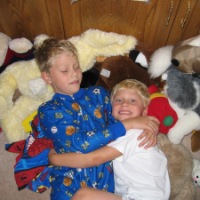