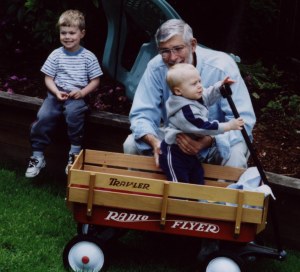 The family home — the one I grew up in — was sold shortly after my parents divorced. By that time, most of us “kids” were already young adults; finishing college or embarking on new careers. But there was still a sense of loss knowing that my own children would never get to “go home” with me. Yes, my in-laws still live in the house my husband grew up in, so there’s a feeling of history, there. But MY home, was gone.

Then … something happened …  slowly … over time.

My father married a lovely retired nurse. At her home – not far from the house I grew up in – they built a sun room, refurbished a guest room and planted a garden.

After my boys were born, we’d sit in the sun room. My dad and step mom, now “Grandpa and Grandma,” would hold the boys. Eventually, my little ones were crawling around the grassy back yard. Later they were toddlers, walking and picking strawberries in the garden. My sister’s daughters were born not long after, and then all four kids would play on the slide and tire swing grandpa had set up, while the adults would share stories and desserts in the backyard.

Eventually my dad’s home was the “go to” place to meet up with siblings who lived nearby and those visiting from across the country. The kids would run and play. The adults would laugh.

My kids are teenagers now and we’ve relocated to the Man Cave in New York. Recently my husband took the boys back for a visit to the west coast. My oldest son’s request? He wanted to visit his grandparents in the sunny backyard at their home.

Without realizing it, My dad and step-mom’s home became my home. Not the home I grew up in, but the home where my children grew to know their grandparents. Where there was love and history.

My own grandparents emigrated with my dad from the Netherlands, and — as is the Dutch custom — they named their new home in the U.S. The name they chose: “Nooit Gedacht.” It means “never expected” or “never thought,” because — they explained — they didn’t expect to be living in the U.S., and didn’t know they would love it so much.

In my heart, I have hung a little shingle outside my dad’s home. It reads “Nooit Gedacht.” 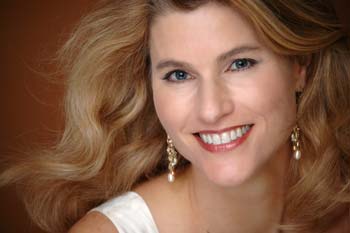